Back cover blurb for Deadly Portfolio: A Killing in Hedge Funds

(Please note: the text below was initially on the back page of Deadly Portfolio. As reviews came in, however, this synopsis was shortened so that excerpts from the reviews could be quoted.)

July 2008. Four families are riding high on heady market returns until the body of Rene McAllister, wife of multi-millionaire Alan “Mac” McAllister, washes up on the beach after a daylong Fourth-of-July bash at the home of stockbroker, Matthew Wirth. Eager to avoid publicity, authorities dismiss her death as an accident. Days later, when the body of college drop out, Jamie Sherman, a neighbor to Wirth, is discovered adrift in his fishing skiff, investigators suspect foul play, but the Medical Examiner reports that the youth died of a drug overdose. Only Detective James Raker, upon hearing McAllister’s complaints of unauthorized trading in his deceased wife’s account, suspects the two deaths are related. Bucking his superiors, Raker plunges into an investigation and quickly discovers that at least four members of the affluent lakeside community had motive and opportunity in either one or both of the deaths. Raker’s pursuit slams headlong into an investigation being conducted by the State Bureau of Investigation (SBI) who were closing in on Jamie Sherman’s drug dealings in the affluent neighborhood.

Ignoring the orders to drop his investigation, Raker fears that the killer will attack again and races to prevent it. The killer does strike for a third time but, tragically, claims the wrong victim. The story is set in the fictitious bedroom community on Heron Lake, NC, a short commute from Charles City, a metropolitan area of more than 1,000,000 and the financial center of the state. 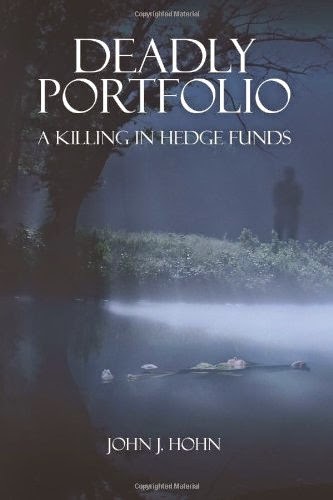 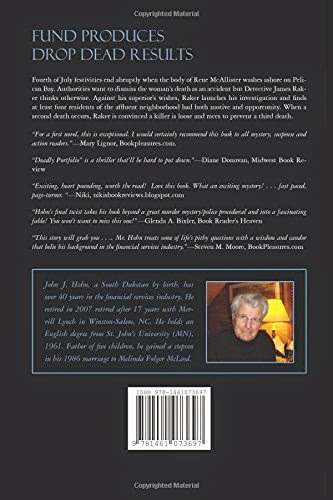 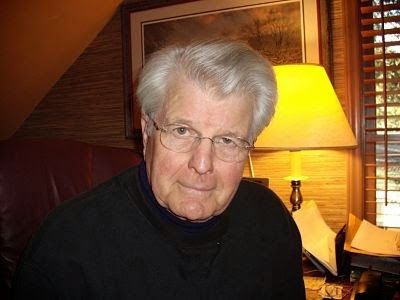 I am a Midwesterner by birth. Yankton, South Dakota, is my hometown. I graduated from high school there in 1957. After four years earning degree in English at St. John’s University (MN), I became a teacher. My first wife, Elaine Finfrock, also of Yankton, and I had five children; four sons and a daughter. We divorced in 1977.

In 1964, I joined The Travelers in Minneapolis, MN and began what turned out to be a 40 year career in the financial services industry. During the that time, in addition to The Travelers, I held positions with Blue Cross/Blue Shield of Minnesota, Wilson Learning Corporation, and Wachovia Bank and Trust. While at Wachovia, I served in many different positions, ending my tenure as a representative of the trust department services in the greater New York City area. I retired at the end of 2007 after 15 years as a Financial Advisor with Merrill Lynch serving over 300 clients in the Winston-Salem, NC area.

In 1986, Melinda Folger McLeod and I were married and I gained a stepson, Matthew. Currently, we divide our time each year between our cabin New West Jefferson, NC and our cottage in Southport, NC near the Cape Fear River. I enjoy golf, music, and reading history. Since my retiring I have focused on my writing, an avocation throughout my life. In 2010, I completed my first novel, Deadly Portfolio: A Killing Hedge Funds and the sequel, Breached was published August 2014.

Sales Sites: Both books are available at local bookstores everywhere. They may not be in inventory but they both can be ordered from a reader's favorite store.
Ebook versions are available in Kindle through Amazon and all eBook formats through Smashwords.

Links are as follows:
Deadly Portfolio: